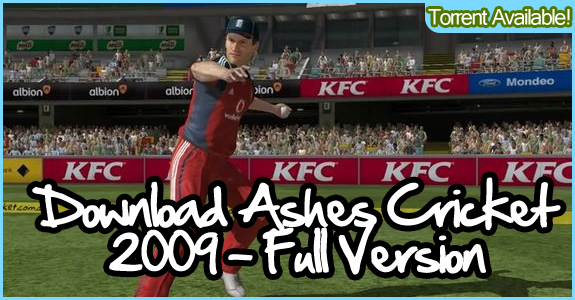 According to the game, the game includes an intuitive, interactive bowling control scheme and dynamic and intuitive batting, with greater coverage and shot choice than previous games. The game also features official Hawk-Eye visualisations during play.

Info: Ashes Cricket 2009 Is the official game of the tournament and is fully licensed by Cricket Australia, the ECB (England and Wales Cricket Board) and the MCC (the Marylebone Cricket Club – owner of the Ashes urn), which means the game will have all the official players, kit and stadia – including Lords and The Brit Oval, from this year’s Ashes Series.

Please seed it for other users 🙂 Sharing is caring! (Direct Download!)
[/sociallocker]
The game is amazing! Make sure you read the requirements and read-me! All the instructions are given in the read-me file. The game is RELOADED. Note that this game has been given out for free only for information purposes.
Load More In Ashes Cricket 2009
Click To Comment